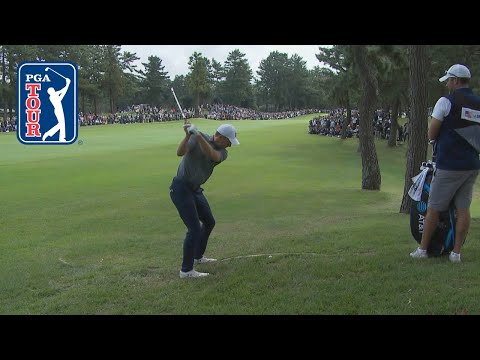 In the opening round of the 2019 ZOZO CHAMPIONSHIP, Jordan Spieth took a double bogey on the ninth hole. He made a cautious second shot and topped the ball, leaving it in the same position. He got it out on the third shot, but he hit a root, causing obvious discomfort.

Tiger Woods makes his season debut as the PGA TOUR plays its first official event in Japan at the inaugural ZOZO CHAMPIONSHIP. Woods is back in action after a knee operation, just weeks before he leads the U.S. Team at the Presidents Cup in Australia. Reigning FedExCup champion Rory McIlroy, along with former FedExCup champions Justin Thomas and Jordan Spieth and local star Hideki Matsuyama join the field at the Accordia Golf Narashino Country Club. This is McIlroy’s first PGA TOUR start since his victory at the TOUR Championship in August where he won the FedExCup and was named Player of the Year. Can he get off to a winning start in Japan?

Welcome to the official YouTube channel of the PGA TOUR.

Here you can find everything you need to stay up to date with the world’s foremost golf tour. Check in for highlights from every tournament plus player interviews, player profiles, tournament previews, swing analysis and all the greatest shots and amazing moments. Teryn Schaefer presents the best social media posts from around the world of golf in ‘Good, Bad & Unusual’ and after each day’s play brings you the biggest talking points in ‘The Takeaway’.

Check out https://www.pgatour.com for complete coverage along with all the latest news, scoring, and stats!

About mrwonderful 1843 Articles
Just another duffer :) But, hey.. I'm bringing you golfingnewstoday.com .. a great little site that is updated daily. Enjoy and I'll see you out on the cyber links! Kevin a.k.a mrwonderful